Coloured postcard titled "Houses on Westholm Green, Garden City". The original watercolour was created by W W Ratcliffe. A view showing groups of houses situated around a green. Two figures can be seen sitting on the grass and one standing.

Ratcliffe was born in 1870 in Norfolk. After leaving school he worked as a clerk at a cotton merchant’s office and over seven years attended classes in practical design at the Manchester School of Art. This led to work as a wallpaper designer from 1894.

In 1906 Ratcliffe moved to Letchworth Garden City, likely attracted by the prospect of other likeminded artists and craftspeople making this unique town their home. Stanley Parker, brother of Letchworth Town Planner and Architect Barry Parker, became a firm friend, alongside Harold Gilman a fellow artist who moved to the town in 1908.

Ratcliffe worked in Letchworth as a freelance designer, creating illustrations of the Garden City for publications and postcards. Later he became more focused on fine art and enrolled at the Slade School of Fine Art in London. He passed away aged 84 in 1955. 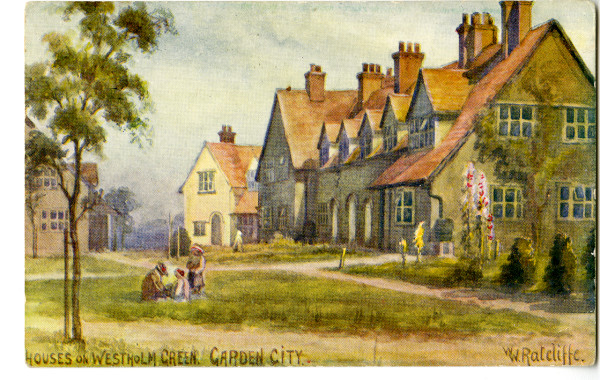